I am not a journalist, neither a virologist or really firm about the corona virus. What I know, is of course not more than just what others know about the recent situation. But I like to report a little bit about the daily life in Santo Domingo and the Dominican Republic. Maybe people are interested about how things are running here and what people do.

But first I would like to thank the Chinese government for the recent development. You made all that possible because of these strange eating and hygiene habits. All of our lives are potentially affected and theoretically in danger because they like to eat this weird type of animal and made medicine out of it:

Whatever crank and perfidious gourmet phantasies they were trying to satisfy for themselves, now everyone turns insane because of that and freedom worldwide is or will be limited gradually. There’s no court of justice to hold China or Chinese for all of that responsible. How to sue and penalize China for that?

Probably, people worldwide will at least boycott for a few weeks the Chinese imports and low-quality Made-in-China labelled products to create at least a little backlash. I can remember the same happenings for the UK and the British Beef industry with BSE problematic decades ago. A poor consolation, but other than that there won’t be any international penalties possible. China is a too heavy and dependent player and definitely won’t take responsibility for that. Personally, I can live for a couple of months without buying new and useless plastic junk anyways.

About the Dominican way of with dealing problems

But a more interested question was for me IF people from the Dominican Republic do something. The Dominican mentality is very distinct and laid-back. I think, it could be described as the following:

“What should I care about other people’s problems? I am doing just fine, I enjoy my life and I have no worries as long as I am sufficiently supplied and have enough to eat and to drink. Gracias a Dios!”

This careless and maybe ignorant attitude for others and themselves is of course be put to the test when it comes to extreme situations. Situations become extreme for an individual, when they are exceptional, unforeseen and if there are no experience values to benefit from. What is even more complicated and delicate at the same time, is when these extreme situations become a collective problem.

However, the Dominican Republic is actually quite lucky when it comes to extreme situations or natural disasters. The huge earthquake was 2011 in Haiti and affected the Dominican Republic only in minor cases. All types of Caribbean tornados regularly hit other countries. The country is politically relatively stable and there aren’t any supply shortages, because the agricultural conditions of the country allow a rich variety of food. At least that’s my own perception.

The Dominican Republic decides more or less like a laggard

Due to its geographic and historic situation, the Dominican Republic is an ideal spot for tourism and functions as a connection anchor in Latin America. Santo Domingo (where I live at the moment) is considered as an important air hub on the American continent and has two international airports.

And they are connecting the biggest country of the Caribbean with many other countries. Of course. Because people from these countries are planning their vacations in the Dominican Republic.

In fact, there is an extreme high dependency on other countries because these tourism reasons. The Dominican Republic waits for the customer to show a reaction before they will themselves do actions.

This laggard type of behavior slows down a country. Not to suppress the facts with the ongoing problematic with corruption. According to the World Corruption Index 2019, the Dominican Republic ranks 137 of 180. Not a surprise, that this is quite bad scoring.

All these reasons reflect on the situation with the handling of the Coronavirus a well. Inefficient and corrupt politicians don’t really know what to do in this case. In this emergency situation, it’s of course difficult to have a Plan B, if you don’t even have a Plan A.

Why you want to ask?

2020 is a very important election year for the Dominican Republic. On 17th of May there will be for example the general elections of the country. It’s because of that very convenient from the perspective of the running leaders of the Dominican Republic to keep the population quiet and controlled.

In times of these aforementioned extreme situations, the Dominican politicians show a lack of decision making. It would be actually the perfect moment to show some character and profile for the upcoming votes. It seems to me, that they more scared to do something wrong than make a clear statement to prepare the population for what’s about to come.

But there aren’t only general elections in the Dominican Republic. The municipal elections were supposed to happen on February 16, but were due to an embarrassing error of the automated voting system suspended to March 15.

That’s exactly tomorrow! Millions of Dominican people will try to vote tomorrow again. Now that’s quite a delicate moment and situation. Suspending it again will cause protests and unrest. But holding the elections will spread the Coronavirus rapidly amongst the population.

And after the looooong introduction, I will gladly start now the actual topic of this article. The Coronavirus.

Next page: Facts about the Coronavirus in the Dominican Republic

One thought on “Coronavirus in the Dominican Republic – Facts, statistics, possible effects and some scenarios” 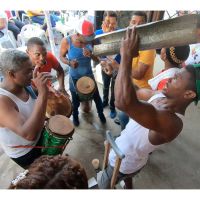