In my last article, I predicted some scenarios that could happen due to the Coronavirus for the Dominican Republic and the counteracts from the Dominican government. I predicted mostly right. Some of my predictions and thoughts were even realized during I was writing the last article. That was now almost 6 days ago. What all has changed since then? How did life change in Santo Domingo? Or isn’t there any change at all visible?

What happens in the Colonial Zone in Santo Domingo during the Coronavirus?

I can only speak for the Colonial Zone and what’s happening in the oldest part of the oldest city of the American continent. Hence, I have no clue at all what is going on in the rest of the city or the Dominican Republic. I can only report what I see myself around hear and what I take notice of. And that was almost nothing.

Some scenes of the typical Dominican life can be observed directly from my balcony. And the daily life is usually full of traffic chaos, a lot of people running for errands through the streets, loud noises at every corner and parked cars that narrow the street even more down.

The following video I recorded on March 8. That’s 12 days ago and was before the Dominican population was made aware of the Coronavirus from their government or paid a deeper attention to that topic. Usually the traffic in the street I live looks the following:

Just the typical Dominican traffic chaos in Santo Domingo. But now 12 days later, the situation on the same street and filmed from the same perspective of the same balcony:

Did you notice any difference? If not let me sum it up:

Especially the scene with the street vendor is not scary but daunting. He comes every day with his old vehicle and yells through the streets. Offering fresh avocados, mangos, and guanabana. The typical fruits from a Caribbean country like the Dominican Republic. But no, it all is a bit different than before.

Next page: Parque Duarte during the Coronavirus

One thought on “Curfew, Day 3 – How is life in Santo Domingo during the Coronavirus?” 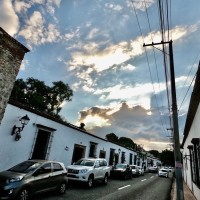